Lumbarda
Price is pending. You may request it.

Marina Lumbarda is situated on the easternmost cape of the island of Korčula, just over two miles SE (6km) of Korčula Town, which is around 20 minutes along the coast by tender or about 10 minutes by taxi or local bus. Lumbarda is an excellent port for day trips to the nearby national park of Mljet and nature park of Lastovo. Although being primarily a home (port) to local and permanently resident yachts, during summertime it is sometimes possible to find an available berth. The marina is protected from winds and waves, primarily bura (NE wind) and jugo (SE wind), by a 50-metre-long breakwater. However, very strong bura winds can cause an unpleasant swell in the marina. The marina is open all year round.

Marina Lumbarda has the capacity of 115 berths, all of which are equipped with mooring lines as well as electricity and water connection. It can accommodate boats up to 25 meters in length. Water depth in the marina ranges from 2.5 to 8 m.

The small village of Lumbarda offers few restaurants and taverns (konoba), bakery, supermarket and a post office, all of which is within the walking distance from the marina. If you need an ambulance, dentist, pharmacy, bank or nautical equipment shop, head over to the nearby Korčula town. There are also more shops and restaurants and a border crossing point in town that is opened all year. The nearest general hospital is in Dubrovnik (120 km) and the nearest airport is Dubrovnik Airport in Ćilipi, 140 km from Korčula.

Frequent daily ferry line connects Korčula Town with the mainland town of Orebić on Pelješac peninsula. There is also a seasonal ferry line operating from June to September, which connects Korčula Town with the following towns: Rijeka, Dubrovnik, the town of Drvenik on the Makarska Riviera and Ancona in Italy. There is also a daily catamaran service to Split, as well a daily ferry service from Vela Luka (40 km) to Split. Korčula Island is connected to Vela Luka and other settlements on the island by local bus lines.
Caution is required when approaching Lumbarda as there are many rocky islets to the NE of the village, as well as numerous shoals. One of the shoals, indicated by a green marker, is situated west of the bay, opposite the marina. 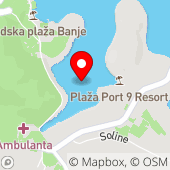 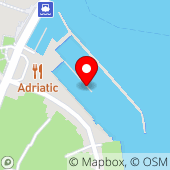 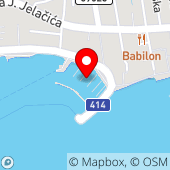