Umag, a town and a port on the nortwestern coast of Istria, is the first nautical entry into Croatia from central Europe, only 40 kilometers from Trieste and 50 nautical miles from Venice. The town dates back to ancient times and is situated in the attractive bay whose most beautiful ornament it the prestigious ACI marina Umag. The marina has 475 berths (moorings) available, can receive yachts up to 40 m long, and has, for the past 14 years, proudly flown the Blue flag, a guarantee of clean sea and superior equipment. In 2007 and 2008 ACI marina Umag was pronounced the best marina on the Croatian side of the Adriatic.

Since the vicinity of Umag is the home to some of the best Croatian wines, which tend to be accompanied by superior gastronomy, ACI marina Umag is the ideal starting port for all those who are looking for gastronomy and enology experiences. Umag is also considered the sports capital of Istria, thanks to the exceptional tradition of sports and recreational tourism. Visitors can engage in a number of sports activities, such as golfing, tennis, cycling, diving, hiking and caving.

…thatnorthwest Istria, with as many as 85 tennis courts, is the leading tennis destination in Croatia. Moreover, only 500 metres away from ACI Marina Umag you will find the Stella Maris tennis centre where the region’s strongest tennis tournament – ATP Croatia Open – has taken place every July for the past 24 years.

…that Umag and its immediate vicinity harbour some of the best restaurants, taverns and wineries from the top echelons of the Istrian and Croatian culinary and wine scene. During your stay in Istria you simply must taste their traditional dishes and the famous red and white wines made from indigenous grape varieties.

mega yachts up to 40m in lenghth can be accommodated

When entering, special attention should be paid to Paklena Shoal, half a mile on the northeastern side of the entrance to the harbor. Paklena Shoal is marked by a lighthouse (Fl (2) WR 8s 10m 8/6 M), which can be used as a way point (45°26,5’ N 13°30,3’ E). The harbor is open to the northwest and one must enter it between a red lighted (Fl R 3s 2M) and green unlighted buoy. To the north, next to the red buoy there is a mark on a rock (black – yellow), which must be rounded from the south. When approaching, it is recommended to keep to a course of 60°. The light positioned on the breakwater (Fl (3) R 3s 8m 4M) is visible after passing the described buoys. The sea depth in the marked channel is 4 m. 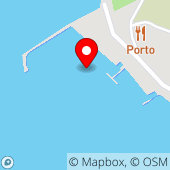 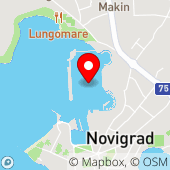 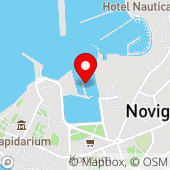