The large ACI marina on the island of Cres is situated in the very centre of the largest and at the same time the most sparsely inhabited Adriatic island. For years Cres has been a favourite destination of untouched-nature lovers and environmental activists from around Europe and the world; they come here for the griffon vulture – the world’s third largest bird, now to be seen only on Cres and two neighbouring islands – and for the unusual natural phenomenon of freshwater Lake Vrana in the heart of the island. Not unexpectedly, ACI Marina Cres has been awarded the Blue Flag, a reliable indication of the perfect quality of its water and the environmental awareness of its management.

The 66 kilometres dividing the island’s northern and southern tips are lined with the reminders of its long and glorious history and offer countless possibilities for an active vacation as well as for learning about nature conservation. Here you will discover a veritable treasure trove of endemic and relic plants, the preservation of which requires precise organisation and dedication of experts from Croatia and abroad. The capacious marina has room even for mega yachts, making Cres extremely attractive for global jet-setters and successful business people. Its top-class dining, based on healthy locally-grown produce, puts it on every gastronaut’s map of places not to miss.

…that one of the last Eurasian strongholds of the proud griffon vulture is right here on Cres? You can learn a great deal about these unusual, regal birds here – but you can also help them by rescuing their young, who are hatched on the island’s highest clifftops.

…that four cave bear skeletons – 12,000 years old – have been found in the Čampari pit cave, a unique speleological phenomenon. They are the only such complete skeletons ever found in this part of Europe.

…the immense diversity of plant and animal life and a large number of endemic and relic species make Cres a veritable paradise for all lovers of untouched nature. According to the most recent sources, Cres is home to as many as 1,300 plant species.

– mega yachts up to 50 m in length can be accommodated

Cres is connected to the mainland by the Brestova-Porozina and Valbiska-Merag (the latter via Krk Island) ferry services. Rijeka International Airport is on the nearby island of Krk. All year long there are daily catamaran and coach services from Cres to Rijeka.

Cres harbour is approached through a 400m-wide channel. Landmarks on approach are provided by lighthouses on Cape Kovačine (Fl (2) R 6s 9m 8M) and Cape Križice (Fl G 3s 9m 4M). The exact position of the Cape Kovačine lighthouse is 44°57.6’ N 14°23.7’ E. On entering the channel between these two lighthouses the Cape Melin lighthouse (Fl R 3s 6m 3M ) is clearly visible. There is an underwater rock in its immediate vicinity and a distance of at least 50m from the cape should be maintained. The entrance to ACI Marina Cres is marked by harbour lights. There is a red light on the breakwater head (Fl (2) R 5s 7m 3M), and a green light on Martinski Islet (Fl (2) G 5s 7m 3M). From Cape Kovačine to the marina the speed limit is 5 knots; within the marina the speed limit is 2 knots. 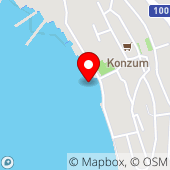