Sheltered from strong bura winds by Mt. Učka, the highest mountain in Istria, close to what was the first coastal spa resort in the Adriatic and the cradle of elite tourism in the region since the time of Austria-Hungary, ACI Marina Opatija is situated in the town of Ičići. This is the best anchorage for yachts under 40 meters in the entire northern Adriatic, and its nautical tradition is three millennia old. In the 9th century BC it was home to Liburnians, skilful builders of fast ships made of wooden planks and rope that took them as far afield as North Africa and Asia Minor.

Just as Opatija enjoyed a great reputation among foreign princes and nobles, so is ACI’s  Ičići marina renowned among foreign boaters and Adriatic sailing enthusiasts. This is not merely on account of its excellent facilities and its proud Blue Flag, but also because Zagreb, Trieste and Ljubljana international airports are just a few hours’ drive away, while  transfers to and from Pula or Rijeka airports are even shorter. Opatija’s balmy climate and the rarity of bura winds there, together with its location and good transport connections (if you don’t like flying, you can drive to Ičići from Vienna, Milan or Budapest in a matter of hours), makes ACI Opatija ideal both for short winter jaunts and as a start or end point of an Adriatic cruise at any time of the year. It is never too late to plan a route, and it is a particular pleasure to do it in the marina, with a spectacular backdrop of Krk and Cres, the two largest Croatian islands.

…that tourism in Opatija began in 1844, when the rich merchant Iginio Scarpa built the  Villa Angiolina summer house? Noble personages began to stay at the villa, including Maria Anna of Savoy, Empress of Austria, who spent three months there, spreading the Angiolina’s fame at the Viennese court.

…that Opatija’s Slatina area is the location of the Croatian Walk of Fame? The stars were constructed from 2005 to 2008, and honour people whose work contributed to the promotion of Croatia, such as scientist and inventor Nikola Tesla, writer Miroslav Krleža, and athletes Dražen Petrović and Janica Kostelić.

…that no lesser a personage than Austrian Emperor Franz Joseph provided a huge boost for tourism in Opatija by declaring it a spa town in March 1889. Five years later he chose Opatija as the site of his meeting with German Kaiser Wilhelm II, which was reported on even by the Gray Lady, the New York Times.

– mega yachts up to 40m in length can be accommodated

ACI Marina Opatija is located in the heart of Europe, only six hours’ drive from Munich, Vienna, Milan, Budapest… There are five international airports (Rijeka, Pula, Zagreb, Trieste, Ljubljana) within a 150 km radius, and motorways provide excellent connections to the rest of Europe.

From the sea the marina is easily identified by its breakwater. The harbour is entered from the northeast. There is a lighthouse (Fl R 3s 7m 3M) on the breakwater’s head. The lighthouse’s exact position is 45°18.9’ N 14°17.8’ E. Water depth at the marina entrance is 7 metres. The speed limit within the marina is 2 knots.

Note: It is recommended to use the official navigational charts published by HHI Split: 100-18, 50-4 and MK-5. 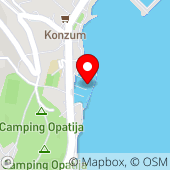 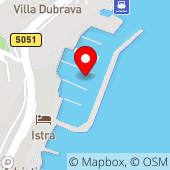 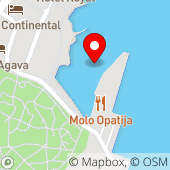