The town of Vodice (“waters”) owes its name to the wells which never run dry, not even during the hottest days of summer. The locals traded water to islanders until the 19th century, as testified by the two wells which still stand in the town square. Since the independence of Croatia Vodice has become a very important tourist centre, whose range of tourist services was significantly improved with the construction of ACI’s marina. The town is surrounded by the sea, islands and a river, and there are two national parks – Krka and Kornati – in close proximity. Vibrant and noisy during the day and magical at sunset, in the summer months Vodice is alive day and night.

Its continuous development of tourist facilites has turned Vodice into the leading resort on the Šibenik Riviera, welcoming 40,000 visitors during the summer months. Unsurprisingly, ACI Marina Vodice is one of the favourite spots for boaters looking for activity holidays, entertainment, and a wide choice of  enjoyable things to do. The marina is located in the town itself, in the northeastern part of port of Vodice (Vrulje Cove). It is protected by two breakwaters and open all year round. Vodice has excellent transport connections to the rest of the region via the main coastal road, and is close to two international airports, contributing to the attractiveness of this destination.

…that Šibenik-born Faust Vrančić was one of the genius thinkers, poets and scientists of the Renaissance. Although he is known to the world as the inventor of Homo Volans (the first completely sketched parachute), two of his capital works deserve special mention: the Dictionarium quinque nobilissimarum Europae linguarum, a five-language dictionary, and Machinae Novae, a collection of drawings of advanced machinery.

…that Zlarin is famous for its red coral, to which are ascribed magical powers and curative properties in the treatment of anaemia, diseases of the circulatory system, infections and infertility. It is most commonly believed, however, to protect pregnant women and foetuses from disease, infection and the evil eye.

The town of Vodice is easily identified by Okit  hill (133 m) topped by a small church, as well as by the town’s bell tower and the tall building of the Punta Hotel whose light is visible from afar at night. In addition, there is a tall stone monument in the shape of a torch north of the harbour entrance, the marina’s long breakwater made of stacked-up stones some 100 m east of the entrance to the harbour (which is also the entrance to the marina), and a light on the breakwater head – a red tower with a gallery (Fl R 5s 7m 3M). Southeast of the harbour light on the breakwater, at a distance of approximately 180 m, there is a shoal of about 1.3 m depth, marked by a light (Fl G 5s 5m 2M). The shoal can only be rounded from the right. When entering the port at night, watch out for the shoal – it is marked by the obscured sector of the Vodice harbour light. 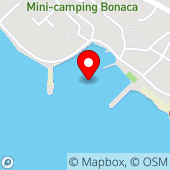 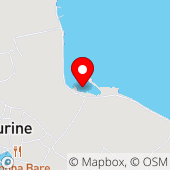 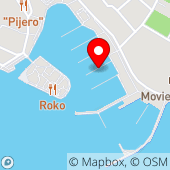 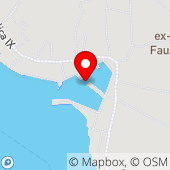