Marina Kremik
Price is pending. You may request it.

Marina Kremik lies in a picturesque bay surrounded by hundred-year-old vineyards that produce the famous Babić wine, 2 miles S of Primošten, 3 miles NW of Rogoznica and 14 miles S of Šibenik. It is the perfect location for cruising north to the Kornati National Park or south toward the islands of Vis and Lastovo. The marina is a proud owner of the Blue Flag since 2003 when it was completely renovated. It is a second category marina. Situated in a deep inlet, Marina Kremik is one of the most sheltered marinas in the Adriatic, which offers a safe refuge in all wind and weather conditions, although strong south wind (jugo) can cause swells.

Marina Kremik is opened all year round. The busiest months are July and August.

Marina Kremik has 9 pontoons with 393 wet berths and 150 dry berths, all of which are equipped with water and electricity (220 V/380 V). The marina has finger berths for safer and easier berthing. Besides finger berths, the marina has mooring places for bigger yachts. It can accommodate boats up to 25 m in length and with a maximum draft of 15 m. Water depth at the pontoons ranges from 5 to 15 m.

There is a harbourmaster’s office (opened only in summer) and a border crossing at the north end of the marina. The working hours of the grocery store in the marina are from 7.30 a.m. to 8.30 p.m. during the summer season. The town of Primošten, which is around 3.5 km from the marina, has many necessary facilities a sailor might need, such as an ambulance, dentist, pharmacy, banks, post office, farmer’s market, fish market, private accommodation, hotels, shops and restaurants.

Marina Kremik is well connected by road network and can be easily accessed by car or taxi. Although local buses pass by the marina, they do not make a stop (unless you bribe the driver). The marina offers a mini-bus transfer service to Primošten. Regular local and national bus lines stop in Primošten.

There are no hazards when approaching the marina, though there are several small islets offshore that need to be avoided in poor visibility. 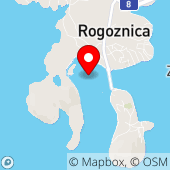 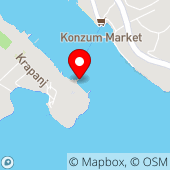