Opposite the island and town of Hvar, at a distance of only 2.5 nmi, lies Palmižana, a famous old haunt of Hvar residents. Hidden in one of the safest bays in the Adriatic, on a car-free island, Palmižana is the ideal retreat for all who wish to escape from the bustle of city life. At this popular boating destination you can experience a relaxed and carefree holiday in a unique atmosphere of harmony with nature. You can have dinner in an art gallery or botanical garden and enjoy Dalmatian cuisine, full of unmistakable flavours, while basking in the aromatic air of the Mediterranean. Rosemary, basil and lavender, cacti and assorted exotic plants make Palmižana a true natural paradise. A walk along the island’s footpaths, in the pleasant breeze and with the fabulous view of Hvar glittering in the distance luring you with its abundant nightlife, will always stay in your memory. From swimming and hiking to kayaking, diving and surfing, Palmižana offers plenty of opportunities for an exciting holiday.

ACI Marina Palmižana, open from April to end of October, is one of the most beautiful marinas in the Adriatic. It is located in its namesake bay on the northeastern coast of Sv. Klement (St. Clement), the largest of the Pakleni Islands. The rest of the archipelago is also easily reached from here: from Palmižana you can set off to explore numerous hidden coves and isolated beaches which will leave you breathless.

…that the town of Hvar has the oldest surviving public theatre in Europe. The theatre was established in 1612 during the tenure of Rector Pietro Semitecolo and its current Neo-Baroque appearance dates to the 19th century when the stage and auditorium with boxes were constructed, as were the still-surviving set designs.

…that in 2008 Hvar celebrated 140 years of organised tourism, an accomplishment very largely due to its being the sunniest Croatian island, with approximately 2,800 hours of sunshine a year.

The distance between the Palmižana marina on the island of Sv. Klement (in the Pakleni Islands) and the island of Hvar is 2.4 nautical miles. Although there is a chance of a tidal wave in case of heavy west or southwest winds, most of the time the cove provides safe shelter from the waves and wind. To the north, in front of the entrance to the marina, lies Baba Rock, marked with a black-and-red column with two spheres. It is only visible during low tide and at night is marked by lighthouse (Fl(2) W 10s 7m 4M) the exact position of which is 43° 10.1’ N 16° 23.8’ E. As the rock is wide, it is recommended to steer clear of it, especially on its northern side. The entrance to the marina is marked with an “ACI” signboard. When approaching from Cape Pelegrin, it is safe to steer toward Baba Rock, and when approaching from the direction of the town of Hvar the same landmark should be used, taking care, however, not to sail too close to the islet of Gojca. If approaching ACI Marina Palmižana from the south, the course leads between the islands of Borovac and Sv. Klement, where the sea is less than 5 m deep. This passage is not lighted. 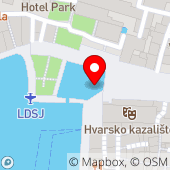