In 293 AD Roman Emperor Diocletian ordered the construction – on the ruins of the Greek city of Aspalathos and near Salona, an ancient urban centre – of a magnificent palace in which he would spend his final years. The town of Split as we know it today expanded from Diocletian’s Palace, the world’s best preserved palace from late antiquity. Split is now the capital of Dalmatia, captivating visitors with its Mediterranean charm and majestic architecture. Modern Split is most closely identified with popular music and sports, earning Diocletian’s city the sobriquets of “the most musical Croatian city” and “the sports-maddest city in the world”.

In the most beautiful part of the city’s port, north of the Sustipan peninsula, lies ACI Marina Split. It is open all year round, its long breakwater providing excellent protection from rough seas and southerly winds that are so often mentioned in many popular local songs. It is at ACI Marina Split that the Split Lungomare begins; this longest promenade in the Adriatic – and certainly one of the most beautiful – will take you to the famous and diverse beaches of this “beautiful, sun-kissed flower of the Mediterranean,” as another popular song puts it.

…that Split is home to the Museum of Croatian Archaeological Monuments, the oldest museum in Croatia, founded in 1820. The museum houses priceless artefacts of ancient cultures which left their mark here.

…that the number of beds in private accommodation grew by an incredible 50 percent from 2011 to 2012 – if you haven’t visited Split in a while you will be surprised by how many new family-owned hotels have opened.

…that according to recent theories, Diocletian’s Palace was more than just a place of leisure, but housed a wool -processing facility that funded the former Emperor’s court.

The city port of Split is a large ferry port, requiring extra caution when approaching. Ships leaving the port have the right of way in manoeuvring, which it is advisable not to disrupt. It is also forbidden to anchor in any part of the port, except in emergencies. The port is entered through a wide passage marked by lights and day-time markings. When approaching the port the following landmarks can be used: the prominent bell tower of the Cathedral of St. Domnius; Cape Sustipan; and a stone monument to seafarers in the shape of a lighthouse, which is in fact a lighted stone obelisk (Fl(2) W 20s 54m 10M). On the port (left-hand) side stony Cape Sustipan there is a red tower with a red light (Fl R 6s 9m 5M), while on the starboard (right-hand) side of the entrance to the port, on the head of the main breakwater, there is a prominent green lighthouse (Fl G 6s 11m 10M), equipped with a fog signal and 30-second horn. When approaching ACI’s marina white rocks can be seen on the wooded peninsula of Sustipan, as can the inside breakwater at the eastern entrance to the marina, marked by a red tower with a column, gallery and light (Fl R 2s 6m 3M). The reception building, restaurants and workshops in the marina are also visible. When approaching the marina and the small ports to the west of it, steer closer to the head of the inside breakwater. As the area of the newly-built western waterfront has not been surveyed hydrographically, berthing there is forbidden, except when approaching the fuel station.

Note: It is recommended to use the official navigational charts: 100-21, 100-26, MK-16, MK-18 and Plan 47, as well as the following sailing guides: Peljar I (Sailing Guide I) and Peljar za male brodove (Small Vessels Sailing Guide), Part II – all published by HHI Split. 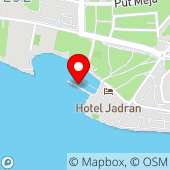 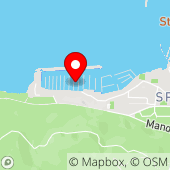 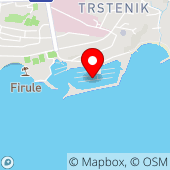 Institute of Oceanography and Fisheries
Marina 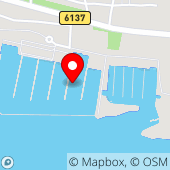