Marina Vrboska is located in Vrboska, the smallest town on the island of Hvar, on the N coast of the central part of the Hvar Island, a mile NW from Jelsa. Situated in a narrow, meandering inlet of Vrboska, the marina offers a safe shelter in all wind conditions except strong SE wind, which can create a dangerous surge in the harbour. There is an island in the middle of the inlet and numerous small bridges, which make the setting extremely attractive, with an almost Venetian feel to it. Marina is open all year round. It gets busy during the months of July and August.

The marina has 119 wet berths and 17 dry berths, all of which are equipped with water and electricity. It can accommodate boats up to 20 metres in length. Water depth in the marina ranges from 2 to 5 metres.

There are several restaurants, taverns and bakeries in the immediate vicinity of the marina, in the small town of Vrboska. There is also a post office, grocery stores, market and fishermen’s museum celebrating the long fishing tradition of the port. If you need an ambulance, dentist, pharmacy, veterinarian or bank, you should head over to the nearby town of Jelsa (5 km).

Vrboska is connected with the mainland city of Split by ferry from Stari Grad, 7 km west of Vrboska. There is also a boat service to the town of Bol on the neighbouring island of Brač, which has a small international airport. Local bus lines connect all towns on Hvar Island. Nearest port of entry during the summer season is in Stari Grad. The nearest year-round ports of entry are in Split and Korčula.

Although it is the smallest town on the island of Hvar, the beauty of Vrboska easily surpasses that of all the others, primarily due to its  geographical location. It is situated on the northern coast of the central part of the island, deep in a bay at the end of a narrow, meandering inlet. In the middle of the bay there is an island and numerous small bridges span the channel, earning Vrboska the nickname of “Little Venice”.  Roman ruins indicate that the town has been inhabited since antiquity, but the oldest preserved monuments and buildings date back to the 15th century.

Impressive old houses in Gothic, Neo-Renaissance and Baroque styles, as well as Mediterranean architecture with characteristic stone buildings and narrow streets, predominate in the town. This idyllic picture is complemented by the thick pine forest hugging the town on the landward side, and beautiful beaches and coves on the seaward side. A rich tradition of fishing is evident in the cuisine offered in this charming, warm small town. Nowadays the primary activity in Vrboska is tourism, of course, and the central marina on the northern coast of Hvar is economically the most important establishment in Vrboska. ACI Marina Vrboska, located in the outer part of the harbour of Vrboska, is open all year round.

…that the fortified church in Vrboska is one of the most beautiful examples of this type of architecture. It was built on the foundations of the former Church of St. Mary, burnt down during the large Turkish raid lead by Uluj Ali Pasha, when most of the island was plundered and burnt.

…that Vrboska has a long tradition of nudism, mostly practiced on the island of Zečevo and in the Nudist Camp, only a kilometre from the town centre.

Vrboska is connected with Split, the regional centre (with an international airport and motorway to Zagreb) via the ferry port in Stari Grad, 7 km away. It is also connected with Rijeka and Dubrovnik by year-round and seasonal ferry services, as well as with the Italian cities of Ancona and Pescara via Split, and Bari via Dubrovnik. There is also a boat service to the town of Bol on the neighbouring island of Brač, which has a small international airport.

Vrboska is a town and harbour situated on the northern coast of the island of Hvar, at the end of a deep and narrow bay, so the marina provides good shelter from all winds. When approaching from the north, a good landmark is provided by the island of Zečevo, which has a lighthouse (Fl W 5s 11m 5M) the exact position of which is 43° 11.5’ N 16° 42.1’ E. To reach ACI Marina Vrboska the Glavica peninsula must be rounded. At night one should steer towards the red lighthouse marking the entrance to Jelsa (Fl R 3s 6m 5M). When the lighthouse on Cape Križ (Fl W 2s 5m 5M) comes into view, the lights of the town of Vrboska will also become visible; steer in that direction. When coming from the south, southeast or east, the marina can be approached by sailing along the northern coast of Hvar Island from east to west. All three lighthouses mentioned above are visible at night and the piers of ACI’s marina are illuminated as well. 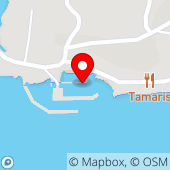 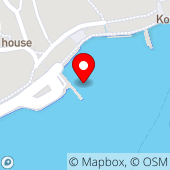