Marina Agana is situated in a small Dalmatian village called Marina, 13 km W of Trogir and 13 km E of Rogoznica. Marina was up until recently a neglected fishing settlement, but it became more tourism-oriented with the construction of the Marina Agana and the conversion of the 16th century fortified tower into a luxury hotel and restaurant. Situated in a tiny inlet, Marina Agana provides an excellent shelter in all winds, except strong SE winds, which can cause a swell.

It is opened all year round. The busiest months are July and August.

There is an ambulance, dentist, pharmacy, post office, hotel, private accommodation, market, bakery, fish market, few shops and restaurants in Marina. The nearest fuel station is in the nearby town of Trogir (6 nm).

The small village of Marina is well connected by a road and bus network. The Adriatic Highway passes right above the marina. The marina is located 32 km W of Split, which is a major transport hub, with an international airport nearby.

Marina Agana is situated at the extreme W end of Trogir Bay, which is entered between the island of Čiovo and the mainland. There are no dangers when approaching the Marina Bay and Marina Agana, although there are some shoals near the coastline, which is why you should keep at least 200 metres distance from the coast. Marina can be identified by the 16th-century tower at the entrance of the bay.
Marina Agana is a pet-friendly marina. 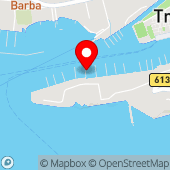