Marina Vlaška
We don't have a price for this marina. If you have it - please, Update marina info and get rewards!

Marina Vlaška is a small privately owned marina located just 15-minute walk away from the picturesque small town of Milna on the W coast of Brač Island. The third largest of the Croatian islands after Cres and Krk, the island of Brač is a very popular resort island, which lies 10 miles SE of the city of Split, directly north of the island of Hvar and east of the smaller island of Šolta, from which it is separated by a narrow strait (the Split Gates). Situated in a small cove on the N side of the entrance to Milna bay, one of the best-protected bays on Brač Island, Marina Vlaška offers a safe shelter in all weather conditions. It is often preferred to the ACI Milna because it is quieter. Marina Vlaška is open all year round.

The marina has three pontoons with 90 wet berths for yachts up to 20 metres in length. Water depth at the pontoons ranges from 2.5 to 8 metres. All berths have water and power supply.

Nearest restaurants and apartments are just a 5-minute walk from the marina. Another 10-minute walk will get you to Milna, which offers most of the necessary facilities a sailor might need, such as an ambulance, dentist, pharmacy, post office, police station, bank, farmer’s market, fish market, several restaurants and shops. The nearest general hospital is in Split.

The nearest fuel station is in ACI Marina Milna.

There is an airport on Brač Island (Brač Airport) near the town of Bol, mainly used for charter flights connecting the island with European destinations during the summer season. The island of Brač is connected with the mainland city of Split by ferry, which departs from Supetar several times a day. Seasonal ferry line connects Milna with Split. The island is also connected to Makarska by ferry from Sumartin, and with Jelsa on Hvar Island from Bol. Local bus lines connect all settlements on the island with Supetar. Split is the nearest all-year round port of entry, and Hvar is the nearest seasonal port of entry.

There are no hazards when approaching Milna Bay and Marina Vlaška by boat. In the Split Gates, in front of Milna Bay (2.5 miles from Milna) lies the islet of Mrdulja, which can serve as a landmark when approaching. The islet is also notable for being the turning point of the local Mrdulja Regatta, an annual sailboat competition. 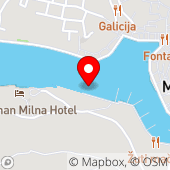 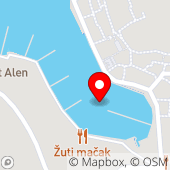