Martinis Marchi Marina
Price is pending. You may request it.

Marina Martinis Marchi is located in the village and harbour of Maslinica, on the west side of the island of Šolta. It is part of the luxurious Martinis Marchi Heritage Hotel complex. Upon conversion of the 17th century fortified palace into a high-class hotel and construction of the marina, Maslinica, once a small fishermen’s village, became a tourist and nautical centre of the island. Situated in a V-shaped inlet and sheltered from W by a group of six small islands and shoals and a long breakwater, this small marina offers a safe refuge in winds from most directions, but is partially exposed to bura and strong N winds (maestral and tramontana), which may cause swells in the harbour. The marina is open all year round. During busy periods, mostly in July and August, there is often little room for visiting yachts arriving late in the day, so make sure to arrive early or book a berth in advance.

Marina Martinis Marchi offers 50 wet berths for yachts up to 35m in length.  Mega yachts longer than 35 m can dock on the outside of the breakwater. All berths are equipped with electricity and water. The water depth at the marina ranges from 2 m near the coast to 11 m near the breakwater.

The restaurant, cafe and hotel are open only in summer season (May-October). There are few restaurants and a grocery store in the village of Maslinica. If you need an ambulance, dentist, post office, bank or police station, head over to Grohote, a small village situated in the middle of the island. Split is the nearest all-year round port of entry, located approximately 9 nm from Šolta. Hvar is the nearest seasonal port of entry. The nearest Airport is Split Airport (20 km from Split).

The nearest fuel station is located in Rogač on the northern side of the island.

The island of Šolta is connected with the mainland (Split) by ferry and catamaran, which departs from Rogač several times a day. All settlements on the island are connected by local bus lines.
The entrance to Maslinica Bay is hidden behind seven islets (Polebrnjak, Saskinja, Stipanska, Kamik, Balkun, Rudula and Grmej). Caution is required when approaching the bay from the south, as there are shoals and rocks nearby. South of the islet of Balkun is Kamićić rock (Hrid Kamičić) and further west of Kamićić rock there is a shoal patch (only 2 m deep).If approaching from N, note that the passages between the islands of Polebrnjak and Saskinja and between Saskinja and Šolta have depths of 2.8 and 3.8 metres respectively. Sailing through these passages should only be done in calm weather and by boats with small drafts. 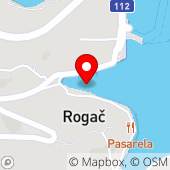