Marina Kornati, Biograd
Price is pending. You may request it.

Marina Kornati is located in the town of Biograd na Moru, between Zadar (24 km) and Šibenik (50 km). Biograd is an interesting sailing destination due to its central location in the Adriatic and close vicinity to national parks Kornati and Krka waterfalls, and nature parks Vransko lake and Telašćica. The town has two large marinas, Marina Kornati and Marina Šangulin, which lie next to one another. Marina Kornati is bigger than Marina Šangulin and a bit further, approximately 400 metres, from the old town. Situated in the well-protected Biograd harbour, Marina Kornati offers a safe shelter from all winds. Marina Kornati has been awarded Blue Flag, a symbol of clean, safe and environmentally friendly marina, six years in a row and is often listed in the top 3 marinas in Croatia. The marina is open all year round. It gets very busy and crowded in the months of July and August.

Marina Kornati has the total capacity of 750 wet berths and 70 dry berths, all of which are equipped with water and electricity (240v and 380v). It can accommodate boats and yachts up to 23 m. Marina Kornati consists of three interconnected units; the central part with the total of 450 berths (including 70 on land), the west part with 200 berths and the south part with 100 berths. Sea depth in the marina ranges from 1 to 6 m. The depth at the marina entrance is 6.5 metres.

There are restaurants, supermarket, hotels and harbour-master’s office very close to the marina. Other facilities such shops, ambulance, pharmacy, dentist and hospital can be found in town. The nearest general hospital and airport is in Zadar.

The island of Pašman and the town of Biograd are separated by the mile wide Pašman Strait. When sailing the Pašman Strait be careful of many small islands and shoals, especially if sailing from south, near the island of Sv. Katarina, which has shoals extending half a mile off its eastern coast. Also, there is a small shoal 200 metres SW of the entrance to the marinas.
Marina Kornati is one of the largest nautical centres in North Dalmatia. It has held more than 40 domestic and international regattas of all classes with over 30 flotillas involving 10,000 sailors from around the world. Also, the largest exhibition of boats in Croatia and region – Biograd Boat Show – takes place here. 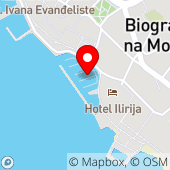