MARINA Tankerkomerc Marina Veli Iž
We don't have a price for this marina. If you have it - please, Update marina info and get rewards!

Marina Veli Iž is located on the north-eastern coast of Iž Island, which is a small island in the Zadar Archipelago, between Dugi Otok Island on the south-west and Ugljan Island on the northeast. It is surrounded by ten smaller uninhabited islands and islets with beautiful beaches and coves. Thanks to its central position in the archipelago and close vicinity to the Kornati Islands, Iž is an ideal location and starting point for sailing routes and trips. Marina Veli Iž is a small and sheltered marina on the southern side of the harbour. It is well protected from all winds and waves by the 20 m long breakwater. The marina is open all year round. The busiest time of the season is in July and August.

Marina Veli Iž has 50 wet berths and 150 dry berths, all of which are equipped with water and electricity. The marina can accommodate boats up to 20 m in length. The depth of the sea in the marina ranges from 2 to 4 m.

Located directly in the centre of Veli Iž, there are many facilities in marina’s immediate vicinity, such as two small supermarkets, bakery, ambulance, post office, private accommodation, hotel, restaurants, farmer’s market and fish market. Most restaurants, however, are only open from Easter to October. The nearest gas station is in Zaglav on the neighbouring island of Dugi Otok. The closest general hospital and airport is in Zadar.

The island is connected to the mainland and other islands by ferry. State road connects other towns and villages on the island.

If the marina is booked, you can also moor at the west quay of the town harbour. However, be careful as the sea depth is around 2.5 m, and especially near the waterfront, where the sea depth is less than a metre!

When approaching, be careful of the shallow water if coming from the north. If approach the ng from north, it is advised to sail into the harbour in a wide arc, as the water is very shallow near the hotel (hotel’s sewer tunnel is nearby, which reduces the water depth considerably). The small islet of Rutnjak lies half a mile east of the harbour. 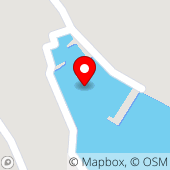