Marina Zadar
Price is pending. You may request it.

NOTE: CONSUMPTION IS TO BE PAID EXTRA

Tankerkomerc Marina Zadar is located in Zadar, the oldest town in Croatia, which lies in the central part of the Adriatic Coast of Croatia, in North Dalmatia. Zadar is approximately 160 km north of Split and 290 km south of Rijeka, and together with Dubrovnik constitutes Croatia’s four major harbours. An important commercial and naval centre since the Roman times, today, Zadar is one of the most popular Croatian tourist destinations. Situated in the south-east of the large Zadar harbour, Marina Zadar provides an excellent shelter from all winds, although some NE winds may cause waves and swells. The town centre is only a 10-minute walk away from the marina. Marina Zadar is a proud owner of the Blue Flag, a world-renowned eco-label which indicates that the marina is clean, safe, accessible and environmentally friendly. The marina is open all year round. The busiest time is in July and August when the marina is often fully booked.

Tankerkomerc Marina Zadar has a total capacity of 300 wet berths and 200 dry berths, all of which are equipped with water and electricity.  It can accommodate boats and yachts up to 25 m in length. Sea depth in the marina ranges from 8 to 12 m, and at the breakwater between 12 and 15 m.

Although being too noisy and busy for many sailors, there are some advantages to large town marinas. For example, there is a multitude of facilities, which small towns lack, such as shopping centre, sports centre, hospital, airport, museums, pharmacies, big farmer’s and fish markets, cinema, cultural and historic landmarks and tourist attractions, etc. There are also many more restaurants, cafes, nightclubs, bars, supermarkets and shops. There are many national parks and nature parks near Zadar (2 or 3 hours’ drive away): NP Plitvička jezera, NP Krka, NP Kornati, NP Sjeverni Velebit, NP Paklenica and nature parks Telašćica and Vransko jezero.

Zadar is connected to many European countries via Zadar Airport, which is located in Zemunik Donji, 8 km from the town centre.

The city of Zadar overlooks the island of Ugljan and Pašman to the west, from which it is separated by the narrow Zadar Strait. Be careful when sailing the Zadar Strait as sea currents and jugo can be strong there.

The entrance to the harbour is from NW between the old town peninsula and a long breakwater. Be careful when approaching the marina, as the harbour is used by tourist boats and there is a small boat that is transferring people from the breakwater to the peninsula (town centre). Also, note that there are many shoals along the shore NW of the entrance. 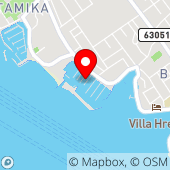 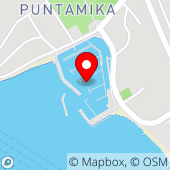 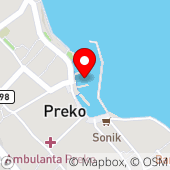